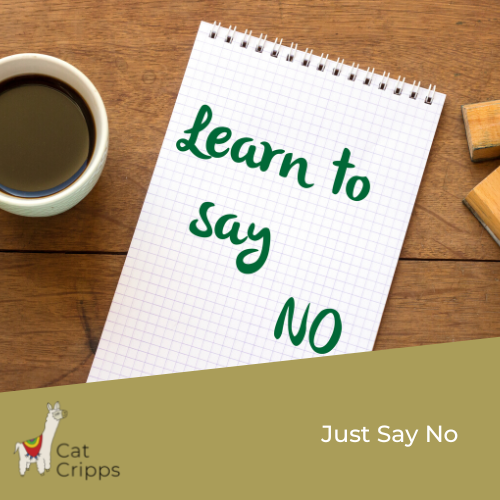 How easy do you find it to say “No”?  No to requests for you to take on more responsibility (and probably lose precious time as a consequence).  No to someone requesting something you don’t really want to do?  And on the other side – do you experience situations where people just won’t tell you No – thank you?

So there are two aspects to this topic

The thing is – and this isn’t really a surprise – we don’t like saying no because we like to be helpful people. If we say no to someone then they won’t be happy and more to the point, won’t be happy WITH US. And that puts us in an uncomfortable situation.

It becomes particularly challenging if we feel there is an implicit bargain in effect. So someone does something for us and then asks a favour of us. A few weeks ago when I talked about Influence I described how people are incredibly likely to comply – but that of course leads to the problem. People DO want to reciprocate and will feel seriously bad about not completing their half of the bargain.

That’s not always the case of course. Often we will be asked something, or we will be the customer with a quote for example – and we don’t like turning people down. (of course the other side of this is when we have put a proposal to a prospect!)

The problem is that saying Yes has consequences too – we become over-worked and stressed – and end up feeling incredibly resentful. Most of the clients I talk to – and friends – take on “far too much” and then complain that it’s all too much. We are all guilty of it to a greater or lesser degree.

The Fear of Missing Out can be strong. We don’t like to miss out on anything – so agree to go to another event, or whatever, because “this might be the one”. People give me the same argument re answering every phone call – even if the number isn’t recognised – “just in case” it’s their dream client. (Generally when pressed, it never has been, but of course the “next one” might be!)

There is also some evidence that women are more likely to say Yes than men. We are (generally) brought up to be people pleasers – to be polite – and we believe that it is impolite to say No.

If you get 5 yeses then fine – or even 4 – but any less than that and you should probably be saying NO!

OK – so you have decided to Say No – now comes the issue of expressing it!  You have some alternatives:

I am sure none of these is a particular surprise – but maybe taking a few minutes to think about these responses will make them come to mind next time you want to say NO!

As for the other problem – people Not Saying No to you – If I had the definitive answer to that I would probably be super rich! Yes- there are all sorts of sales techniques and people offering helpful tips – but in my experience prospects can skilfully avoid all of them and just ghost you (and if you’ve been internet dating recently you will know the phenomenon!!)

It is of course the other side of the above- people don’t like giving bad news! I began to check out “the psychology of ghosting” and most of it relates to dating – but I am sure we have all just had friends who disappear as well as business relationships!

The friends are less likely to do this of course as there is a danger of meeting up socially – usually with internet dating there is no other point of contact so they just move on. In a business context, in my experience ghosting is far less common if there has been a referral or an introduction of some sort – as they will have to explain to the common third party who might be a customer or a supplier. Probably a good reason to cultivate this as a means of procuring new clients!

So in summary – No one likes saying No (or very few people do) but we need to learn to be able to do it gracefully, using some of the strategies outlined earlier.

And if we are ghosted – maybe we can turn those around using tactics such – “maybe not right for you now – when would be a good time to revisit?” – if of course you can communicate with them!

Being able to say No is a skill we all need.  Set yourself free from the tyranny of saying Yes too often!

As always, if you would like to talk more then please do Get in touch.